HD is a Vortech coined term and you can see this marketing word used across all of their race series superchargers as well as an upgrade option across their line. The head units themselves are called HD when in actuality it's just the bearings that are upgraded and specifically the ball bearings cages that are supplied for the output shaft(impeller side). These cages are used to separate the balls while maintaining symmetrical radial spacing between them and in the case of vortech superchargers, come in two flavors. Phenolic resin(plastic) and machined brass, with the latter of the two defining HD. Plastic cages have a high rigidity, do a good job at quieting down bearing noise, and operate well at lower temperatures(250° F). The problem arises when these cages see maintained high rpm which result in higher temps. The constant heat cycling will make the material brittle and it will begin to fail over time. When this happens the ball spacing is not maintained and they can gather causing uneven pressure on the inner race. This uneven pressure will fatigue and wear the balls exponentially. You'll typically hear added bearing operation and or a 'marbly' sound. If not corrected over a given time this will permit the output shaft to have play on the opposite side that the balls are continuing to gather on. With the impeller spinning upwards of 50k rpm at a given time it will start to wobble, causing more spacing between the balls, resulting in further wobble. The impeller will ultimately make contact with the volute(snail section) damaging it in the process and worst case damaging the output shaft gear as well. Brass cages on the other hand are capable of operating at higher temperatures(480° F) while always maintaining symmetrical radial spacing. While the balls themselves will continue to wear over time, you won't typically see failure of the cage itself. This does come at a small price as the cages tend to amplify bearing noises and charger operation is slightly louder.

Typical aftermarket bearings are abec-7 steel balls rated to 59k rpm and optional ceramic balls rated to 62k rpm. The steel balls are a great option for fast/street use and are the cheaper of the two. The ceramic bearings are great for fast/street as well and are recommended for anyone who tracks their car. Because of ceramic's properties they tend to have a longer service life then steel and since they are 40% less dense there's less friction which equates to cooler running. Both bearings come in HD(brass cages) and yes we recommend them! 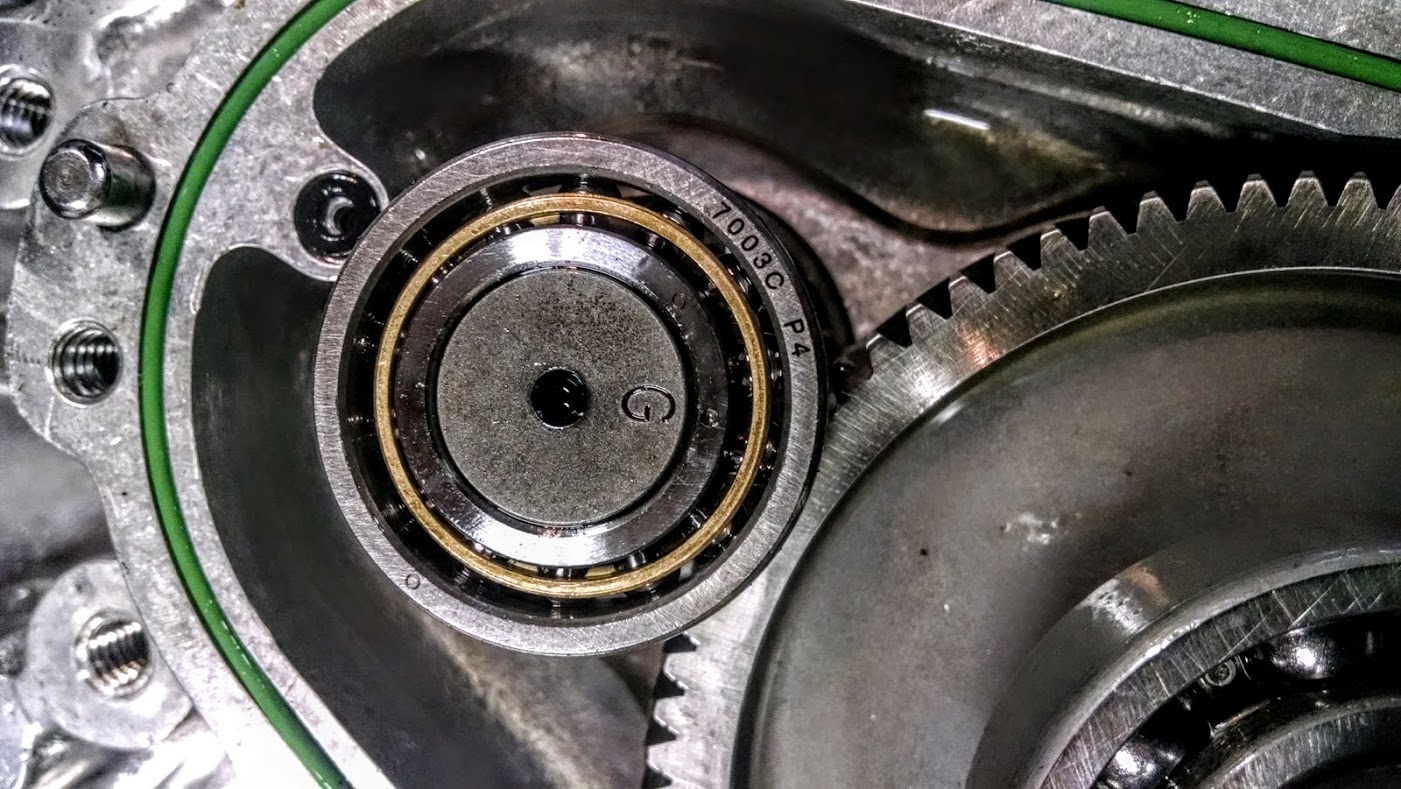 This is a question that we answer quite a bit. VF stage 2 owners are familiar with tensioning their single 6rib belt that drives not only the supercharger but also all their accessories. They're also familiar with what happens when that belt breaks and they're left stranded on the side of the road.

Auxiliary belt driven supercharger's have an independent belt and pulley system. What e9 did when developing the aux cog drive conversion kit was first to improve upon the oem accessory drive setup. We replaced the oem dampr that was designed to operate at stock HP levels and replace it with a ‪#‎fluidampr‬. This added dampening smooths out stock engine operation and harmonics. It's inherent design continues to smooth and dampen operation as more HP is added. 'Cushioning' vibrations that would translate into havoc on your main and rod bearings, through to your drivetrain where most replace the oem dual mass flywheel with a single mass solid flywheel. Ultimately quieting down chatter and smoothing out shifts. This smooth engine operations primary goal is to be more efficient. A more efficient engine translates to more power and this has been proven by dynos. Upwards of 13hp on a NA motor and 20hp on a supercharged motor. What we did next was space out the v9 charger with an incorporated idler bracket. This allowed us the room needed to run an additional(auxiliary) cog pulley mounted to the fluidampr. This auxiliary cog belt now drives the supercharger and the supercharger alone. Over tensioning the charger no longer means over tensioning the accessory pulleys and reducing bearing life on them. Being cogged this also means that you no longer need to over tension the charger as well. Boost comes on earlier and you see higher consistent boost on every shift. Coincidentally since the charger is driven by its own belt and if a belt happened to break, you won't find yourself on the side of the road either replacing a belt or worse getting a tow home. You car and the tune will operate as It did when it had no charger and you can drive home safely on NA power. 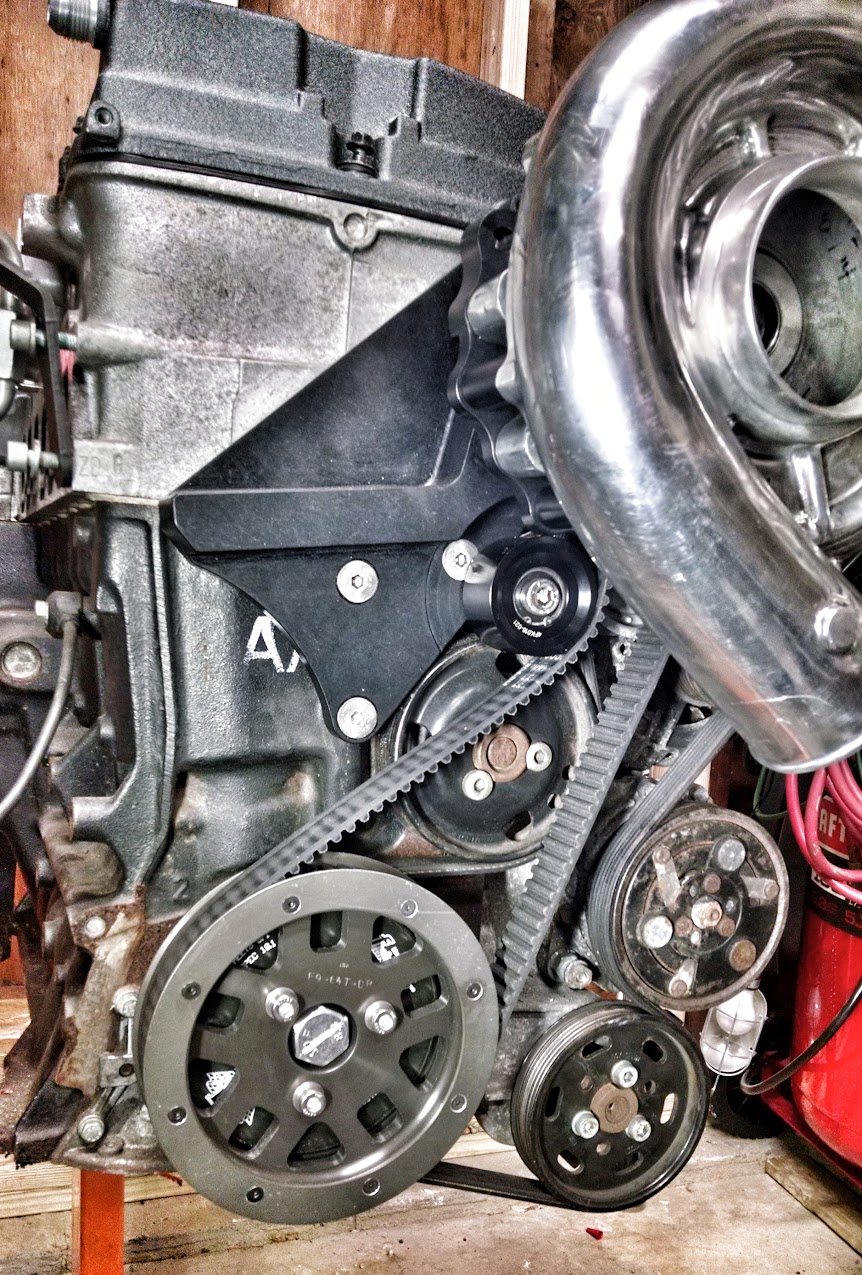 Full time Dad, full time job, and 24/7 e9 hustle. I’m just an enthusiast looking to fill some gaps in the VW/Audi market. Two of which are customer service and quality of work.

My goal is to take one customer at a time and do such a great job that they’re forced to tell somebody else. Turning each oppurtunity into two and continuesly pumping out innovative products and amazing builds.

Please contact us for not only your supercharger needs, but all and any VW/Audi projects you have in mind. Nothing is to small or two big.